The Early Paradigm of Healthcare

The paradigm shift in medical diagnosis of AI was inevitable. The healthcare system changed tremendously in the last century. In the early 1900s, a physician treatment was only possible at a patient’s home. The very few hospitals that existed provided minimum care. Also, medical science and technology were so primitive that physicians could not treat accurately and properly most of their patients, leaving them misdiagnosed or even leaving them to die.

Fortunately, physicians became more effective thanks to the advances of the medical devices. Doctors could use stethoscopes, X-rays, ultrasound, CT and MRI scanners for diagnosis and treatments. Despite the innovation of computer 1950s, the real application of computer in medical science was still a far-fetched dream until 1970s when some Artificial Intelligence Researchers developed systems that could automate a human physician diagnosis. Unfortunately, since the system was found to provide a random diagnosis to the patient without any explanation, it was not approved by the medical community at that time resulting in a very little or no adoption of computer technologies in medical diagnosis. 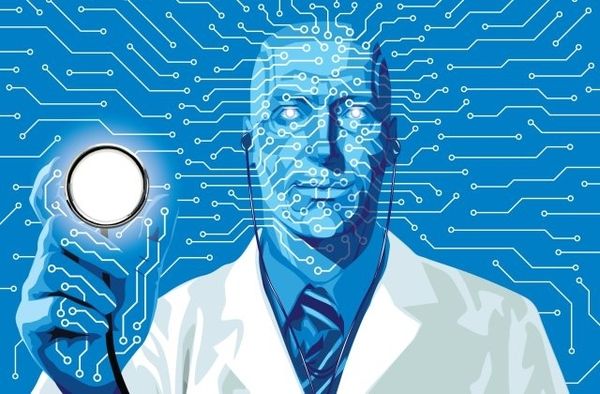 The 2010s can be considered as an inflexion point in the adoption of Artificial Intelligence (AI) medical  diagnosis and Clinical Decision Support (CDS). Over the past few years with proven use of cases, scientists and medical communities have acknowledged the real application of AI in medical diagnosis. However, the application and chances of AI to succeed in any domain largely depends on the volume and availability of data through which AI scientists can develop mathematical and statistical models to teach and train the machines for any future predictions or medical diagnosis. Using trained models and data analysis, AI can offer potential medical diagnosis better and quicker than physicians.
In the healthcare industry, intelligent systems are used much more often than it used to be, especially in cancer diagnosis and treatment. AI can help save more lives due to early detection and accuracy of diagnosis. For example, according to the study from the University of Central Florida, engineers developed an AI algorithm that could accurately detect lung cancers. In general, lung cancer can be seen through a CT scanner. Hence, they fed their AI system with 1000 CT scans to check if they could find defects in patients’ lung tissues. The study revealed that the algorithm was 30 per cent more accurate than a human doctor would have been. Similarly, at the Imperial College of London, an AI system can give the best treatment strategy for a patient with sepsis and at John Radcliffe Hospital in Oxford, they use AI to detect heart defects as well as lung cancer. In addition, another study concluded promising results in their prediction of cancer survival rate. The AI tool could predict the survival rate of current ovarian cancer patients with an accuracy of 93%.
BERG from Massachusetts is an AI that recently found treatment measures for Parkinson’s disease. Atomwise, another AI from California, is being used to detect and treat some of the most serious diseases such as Ebola and multiple sclerosis. Atomwise is designed to screen millions of genetic compounds and most fascinatingly, deliver results 100 times faster than the traditional pharma companies.
There is a plethora of these AI-driven milestones in medical science. Thus, citing the examples could be endless. Deducing, the network of smart system has significantly changed over time from simple detection of diseases to diagnosis, helping in decision making to complete treatment with immeasurable speed and infallibility.

Limitations of AI in Healthcare

However, we must be aware of certain limitations of those intelligent systems. The AI doesn’t have a mind of its own and depends on the humans for its execution (this reasons for the controversial ethical quotient in AIs). Since they feed on the data provided, it is not always infallible as humans are erroneous in themselves. This has resulted adversely.
In 2015, misdiagnosis of illness and a medical error accounted for 10% of all deaths in the USA. And the IBM Watson developed an application that could recommend the appropriate treatments for patients with cancer. Unfortunately, some doctors complained that it sometimes gave recommendations that could prove to be a menace for the patients.
Despite the application of AI in medical diagnosis, it is still rudimentary; its impact, especially in resource-constrained regions around the world, can be huge. In developing countries like Nepal which consists of more than 80% of the rural population, AI solutions can be a game-changer and a lifesaver. Patients in rural areas can benefit from low cost AI-based clinical decision support technologies by early detection of life-threatening diseases like cancer and tuberculosis.
Similarly, AI can mitigate the risks of preventable diseases caused by diabetes such as blindness, cardiovascular, kidney and skin diseases.Blindness is one of the most common diseases in the developing world. As per WHO, there are more than 39 million people worldwide of which 80% could be cured if correct and timely measures are taken beforehand. However, due to high travel costs, lack of ophthalmologists, necessary medical equipment, patients in rural areas tend to skip timely screening their eyes resulting in severe eye diseases and blindness.

Working along this line of technology locally here in Nepal is Wiseyak (www.wiseyak.com). Based in Kathmandu, Wiseyak’s team consists of AI experts and data scientists. Wiseyak is currently developing an AI-based screening tool namely WiseEyes. WiseEyes consists of AI software and a low cost nonmydriatic portable camera which is ideal for rural settings. This kind of low-cost tool powered by AI models can prevent blindness and other serious eyes diseases such as cataracts and glaucoma in rural population by a timely screening of retina and diagnosis of eye diseases. AI can undoubtedly be seen as a boon to humankind as a reliant system to prevent, diagnose and treat pathogens in patients both in resource-constrained or rural areas with healthcare resources and in urban areas with crowded hospitals.

Wiseyak is an AI-based healthcare startup company. At Wiseyak, we focus on building platforms to make healthcare accessible to anyone and anywhere.